3D
Featured Scan The World
8,213 views 814 downloads
10 collections
Community Prints Add your picture
Be the first to share a picture of this printed object
0 comments

In the 17th century, the locksmiths of Nuremberg specialize in the manufacture of polychrome iron safety boxes. Renowned for their inviolability, the latter are then disseminated throughout Europe. The smaller ones, usually used as jewelry boxes, are only a few centimeters, while the larger ones, reserved for banks and chanceries, can measure up to two meters long. The closing mechanism often occupies the entire cover. It is operated by means of a key, via a lock entrance concealed on the top of the cover. The lock on the front is only a decoy. The latter is rarely preserved, hence the great interest of this copy. The name “armada chest” is based on the mistaken belief that these chests were used on Spanish ships to store the assets used to finance the campaigns of the Armada in 1588. 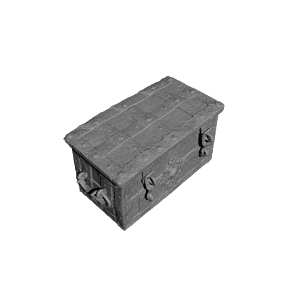 ×
10 collections where you can find Armada chest by geoffrey.marchal