Artemis (Diana) at The Louvre, Paris

3D
Scan The World
3,284 views 133 downloads
Community Prints Add your picture
Be the first to share a picture of this printed object
0 comments

Artemis (Diana) at The Louvre, Paris

We can recognise this sculpture through it's clothing that the depicted figure is Artemis (Diana), the Goddess of hunting. The clothing is almost identical to the famous Diana of Versailles (also available on MyMiniFactory), the long chiton (tunic) has been tucked in to facilitate the act of the hunt. A coat (the himation), forming a series of pleats, passes from the left shoulder and draped to the lower side. The lowered hand (now missing) probably held a bow, like that of the Diana of Versailles, and the right arm lifted.

The original work, now lost, which inspired this replica of the Roman period, is perhaps of a Hellenistic creation, dated around 200 BC. It is known through other copies of the piece from the Archaeological Museum of Seville and the Antiquarium of the Palatine (Rome). 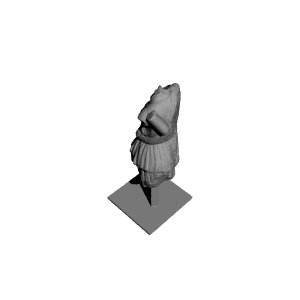 ×
0 collections where you can find Artemis (Diana) at The Louvre, Paris by Scan The World