Athena is an ancient Greek goddess of wisdom and warfare, who was later combined with the Roman goddess Minerva. Athena was regarded as the patron and protectress of various cities across Greece, particularly the city of Athens, from which she most likely received her name. She is usually shown in art wearing a helmet and holding a spear. Her other major symbols include owls, olive trees, snakes, and the Gorgoneion.

In this statue, she is portrayed with a shield and spear, although the spear broke off or was removed. The helmet is typically sitting on top of her head, instead of covering her face. 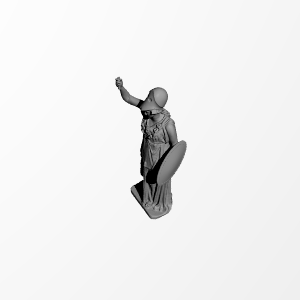 ×
25 collections where you can find Athena by Scan The World
×
Rainer Fuchs
@mix579
1
Printed on: Monoprice
Material: PLA
Posted at: 31st October 2019

Tried twice, each time I got a layer shift on the shield. But otherwise it came out great.