Athena, known as 'Athena holding a Cista' at The Louvre, Paris

3D
Scan The World
3,233 views 235 downloads
1 collection
Community Prints Add your picture
Be the first to share a picture of this printed object
0 comments

Athena, known as 'Athena holding a Cista' at The Louvre, Paris

Athena or Athene, often given the epithet Pallas, is the goddess of wisdom, courage, inspiration, civilization, law and justice, mathematics, strength, war strategy, the arts, crafts, and skill in ancient Greek religion and mythology. Minerva is the Roman goddess identified with Athena. Athena is known for her calm temperament, as she moves slowly to anger. She is noted to have only fought for just reasons, and would not fight without a purpose. Athena is portrayed as a shrewd companion of heroes and is the patron goddess of heroic endeavour. She is the virgin patroness ofAthens. The Athenians founded the Parthenon on the Acropolis of her namesake city, Athens (Athena Parthenos), in her honour. Veneration of Athena was so persistent that archaic myths about her were recast to adapt to cultural changes. In her role as a protector of the city, many people throughout the Greek world worshipped Athena as Athena Polias. While the city of Athens and the goddess Athena essentially bear the same name, it is not known which of the two words is derived from the other.

Easy to print, but z should be at least 100 mm otherwise while you clean support hand and fingers can be broken. Enjoy your printing. 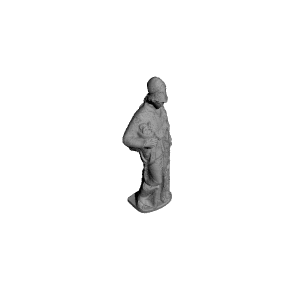 ×
1 collections where you can find Athena, known as 'Athena holding a Cista' at The Louvre, Paris by Scan The World