The Lemnian Athena, or Athena Lemnia, was a classical Greek statue of the goddess Athena. According to Pausanias (1.28.2), the original bronze was created by Phidias circa 450-440 BCE, for Athenians living on Lemnos to dedicate on the Acropolis inAthens, Greece.

It is unclear whether any copies remain. In 1891 Adolf Furtwängler reconstructed two virtually identical, Roman marble statues which he claimed as copies of the original, and identified two Roman marble copies of the head alone. These completed statues were recreated by joining a poorly preserved marble head (Dresden) and a plaster cast of a similar Roman marble head, from the collection of Pelagio Palagi (Bologna), to a pair of identical bodies in Dresden. Both reconstructions and attributions have been disputed; see below.

The sculptures concerned are:

As reconstructed, the completed statues are pastiches of two Roman marbles, one for the head and the other for the body. Athena wears an unusual, cross-slung aegis decorated with the Gorgon's head. She is bare-headed, without shield, holding her helmet out in her extended right hand, and with her left grasping her spear near the top of the shaft.

Furtwängler's identification of the original Athena Lemnia with the Dresden statues and Palagi head was based upon study of an engraved gem and by interpretation of the following passages from Pausanias, Lucian, and Himerios:

[On the Acropolis] there are also two other dedications, a statue of Pericles, son of Xanthippos, and the most worth seeing of the works of Phidias, the statue of Athena called the Lemnian after those who dedicated it.

(4) Lykinos: "Of all the works of Phidias, which one do you praise most highly?"
Polystratos: "Which if not the Lemnia, on which he thought fit to inscribe his name? Or the Amazon leaning on her spear?
...
(6) From the Knidia the sculptor [of Panthea] will take only the head, ... allowing the hair, forehead, and that lovely brow-line to remain just as Praxiteles made them, and the liquid yet clear and winsome gaze of the eyes shall stay as Praxiteles conceived it. But he will take the curve of the cheeks and the fore part of the face from Alkamenes' [Aphrodite] in the Gardens, plus her hands, graceful wrists, and supple, tapering fingers. But the facial contour, its softness, and her well-proportioned nose will be supplied by the Lemnian Athena of Phidias, who will also furnish the meeting of the lips and the neck, taken from the Amazon."

Phidias did not always make images of Zeus, nor did he always cast Athena armed into bronze, but turned his art to the other gods and adorned the Maiden's cheeks with a rosy blush, so that in place of her helmet this should cover the goddess's beauty. Furtwängler's logic has been disputed. "Hartswick has shown that the Palagi head in Bologna cannot have come from Dresden statue B, that the gems Furtwängler employed could be post-antique, and that the sources are impossibly vague." (Stewart) Some of Hartwick's own conclusions have been disputed in turn, i.e., that the head of Dresden A is alien and the entire Palagi type is Hadrianic. Stewart remarks, "So while the type remains intact and looks Phidian, Furtwängler's further hypotheses concerning its identity and date (451-448) remain unproven." 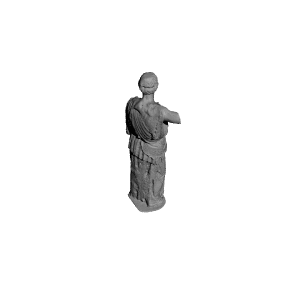 ×
0 collections where you can find Athena Lemnia at The Royal Cast Collection, Copenhagen by geoffrey.marchal
×
Jerry Fisher
@jerry7171
0
Printed on: XYZprinting da Vinci 1.0A
Material: PLA
Posted at: 20th November 2016

This print was made on a da Vinci 1.0 flashed with Repetier 0.92. The PLA filament is indigo from Inland purchased via Amazon. The print was sliced in Cura. The STL was resized to approximately 5 inches. The print setting was 'standard.' Thanks to Marchal Geoffrey for generously sharing his 3D scan of the plaster cast at the Royal Cast Collection at Copenhagen, Denmark.