3D
Scan The World
2,259 views 52 downloads
Community Prints Add your picture
Be the first to share a picture of this printed object
0 comments

'For a nation that is politcally fallen, as were the Romanians from Superior Dacia, there is no other means left to rise again but the iltellectual culture'.

August Treboniu Laurian (17 July 1810 – 25 February 1881) was a Transylvanian Romanian politician, historian and linguist. He was born in the village of Fofeldea in Nocrich. He was a participant in the 1848 revolution, an organizer of the Romanian school and one of the founding members of the Romanian Academy.

Laurian was a member of the Latinist School, a mainly-Transylvanian movement in the Romanian culture which promoted the idea that Romanians are pure Romans, whose history was a continuation of the history of the Roman Empire.

His book on History of the Romanians began with the Foundation of Rome in 753 BC and after the demise of Rome, it continues with the history of the Romanians, with all dates being converted to the Roman system, Ab urbe condita. Thus, in his book it is written that Vladimirescu's rebellion occurred in the year 2574 AUC.

Because of this alleged continuity, he supported the purification of the Romanian language by stripping it of non-Latin elements and attempting to bring it as close to Latin as possible. Between 1871 and 1876, Laurian collaborated with Ioan Massim for a two-volume Romanian language dictionary, commissioned by the Romanian Academy. The dictionary was stripped of non-Latin words, including neologisms as replacements for such words, which were supposed to be eliminated from the language. The dictionary was also written in an etymological spelling system, the result being an artificial language which only vaguely resembled Romanian and it provoked laughter, discrediting the Latinist school.

August Treboniu Laurian's bronze bust was realized by Adrian Popescu and unveiled on the 17th September 2010, with the occasion of celebrating 200 years since his birth. 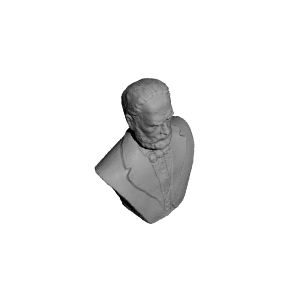 ×
0 collections where you can find August Treboniu Laurian at Astra Park, Sibiu by apllana