3D
Scan The World
2,085 views 119 downloads
Community Prints Add your picture
Be the first to share a picture of this printed object
0 comments

Originally, this statue is one of two. It portrayed Creugas and Damoxenos, two boxers from antiquity, made by Antonio Canova. Canova’s sculptures represent the two mythical characters involved in a fight without a winner; the legend was that, after the last blow given to each by the two boxers, Damoxenos destroyed his opponent, Creugas. He simulated an attack on Creugante head, but he hit him instead in the bowels, causing his death. Therefore, the judges exiled Demoxenos and erected a statue in the Temple of Jupiter in Arcadia in Creugas's honour. 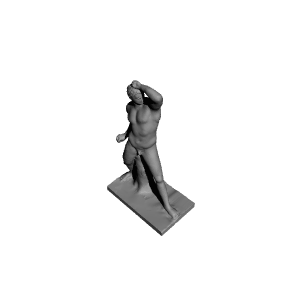 ×
0 collections where you can find Creugas by Scan The World