3D
Scan The World
2,905 views 98 downloads
Community Prints Add your picture
Be the first to share a picture of this printed object
0 comments

In his portraits of the men of letters and nobility of the Enlightenment, Houdon created an entirely new genre, in which he achieved spontaneity and informality of expression without compromising the decorous and elevated presentation of his sitters. His bust of Aymard-Jean de Nicolay, marquis de Goussainville (1709–1785), was exhibited in the Salon of 1779, where it was described as “joining to the most perfect resemblance an elegance and nobility of form.” Nicolay was a member of the noblesse de robe, nobility whose judicial and administrative function dated back to the sixteenth century. As First President of the Chambre des Comptes, he was the senior official at the sovereign court responsible for the royal accounts and for the registration of all laws touching upon the Crown’s domain, a position that had been held by his family since 1506. It is in the carving of Nicolay’s face and hair that Houdon’s genius as a portraitist is most fully engaged. The treatment of the eyes is particularly masterful. He first cut out the entire iris, then bored a deeper hole for the pupil, taking care to leave a small fragment of marble to overhang the iris. The effect is a vivacity and mobility of expression that was acclaimed even in the artist’s own time; it was noted that Houdon was perhaps the first sculptor in the history of art who knew how to render eyes. 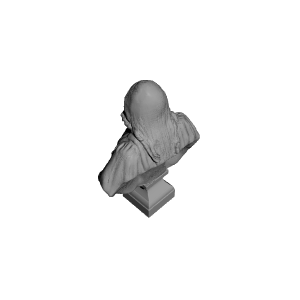 ×
0 collections where you can find Aymard-Jean de Nicolay at The Kimbell Art Museum, Texas by 3DLirious