Bacchante with Roses at The Réunion des Musées Nationaux, Paris

3D
Scan The World
6,350 views 713 downloads
7 collections
Community Prints Add your picture
Be the first to share a picture of this printed object
0 comments

Bacchante with Roses at The Réunion des Musées Nationaux, Paris

In the 1860s, Carpeaux designed a monumental sculpture group, The Dance, for the newly built Palais Garnier, home of the Paris Opera. A French actress, Mademoiselle Miette, posed for one of the figures. To capitalize on the growing market for collectible sculpture, Carpeaux later made numerous smaller works in various media based on the stone original. This one—cast in clay and fired—transforms Miette from a dancer into a follower of Bacchus, the Roman god of wine.

Throughout his prolific but short career, Jean-Baptiste Carpeaux devoted himself to developing a highly sensual aesthetic and style, as well as to capitalizing on his monumental work by reproducing it for sale. He took full advantage of the growing market for small sculpture, producing replicas and fragments of his large pieces in his workshop.

Carpeaux developed techniques for casting works in terracotta, a medium popular since the 18th century and considerably less expensive than bronze for small statuettes. The Bacchante with Roses is an example of this technique which results in smooth, fluid surfaces very different from those of a roughly modeled terra cotta maquette or sketch. Cast terra cottas were produced by squeezing soft clay or by pouring slip (liquid clay) into plaster piece molds. The molds were removed when the clay had partially dried and was still damp enough to be worked with tools. Each piece would be finished by the artist who would sharpen details and refine surfaces. Finally the sculpture would be fired in a kiln until it was extremely hard and durable. Because each piece could be extensively reworked after it was removed from the mold, completed terra cottas cast from the same mold may appear quite different from one another.

Carpeaux used the heads of the female figures in his monumental group known as The Dance as sources for three different busts. The Bacchante with Roses, one of the three, was produced in a variety of materials and was widely popular in the 1860s and 1870s. The bust reproduces the features of Mlle. Miette, an actress at the Palais Royal, who had posed for the dancer on the right in The Dance. . . .

(source; Jennifer Gordon Lovett, excerpted from The Art and Craft of Nineteenth-Century Sculpture, Clark Art. scanned from a cast at the atelier des moulages, RMN) 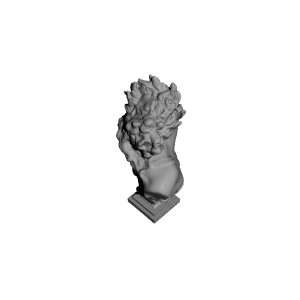 ×
7 collections where you can find Bacchante with Roses at The Réunion des Musées Nationaux, Paris by RMN