Bacchus at The Boboli Gardens, Italy

3D
Scan The World
2,988 views 214 downloads
2 collections
Community Prints Add your picture
Be the first to share a picture of this printed object
0 comments

Bacchus at The Boboli Gardens, Italy

The Boboli Gardens is a park in Florence, Italy, that is home to a collection of sculptures dating from the 16th through the 18th centuries, with some Roman antiquities. The Gardens, behind the Pitti Palace, the main seat of the Medici grand dukes of Tuscany at Florence, are some of the first and most familiar formal 16th-century Italian gardens. The mid-16th-century garden style, as it was developed here, incorporated longer axial developments, wide gravel avenues, a considerable "built" element of stone, the lavish employment of statuary and fountains, and a proliferation of detail, coordinated in semi-private and public spaces that were informed by classical accents: grottos, nympheums, garden temples and the like. The openness of the garden, with an expansive view of the city, was unconventional for its time. The gardens were very lavish, considering no access was allowed outside the immediate Medici family, and no entertainment or parties ever took place in the gardens.

The Boboli Gardens were laid out for Eleonora di Toledo, the wife of Cosimo I de' Medici. The first stage was scarcely begun by Niccolò Tribolo before he died in 1550, then was continued by Bartolomeo Ammanati, with contributions in planning from Giorgio Vasari, who laid out the grottos, and in sculpture by Bernardo Buontalenti. The elaborate architecture of the grotto in the courtyard that separates the palace from its garden is by Buontalenti. The garden lacks a natural water source. To water the plants in the garden, a conduit was built from the nearby Arno River to feed water into an elaborate irrigation system.

Even while undergoing restoration work in 2015, the Large Grotto's statues are still on display and represent defining examples of Mannerist sculpture and architecture. Decorated internally and externally with stalactites and originally equipped with waterworks and luxuriant vegetation, the fountain is divided into three main sections. The first one was frescoed to create the illusion of a natural grotto, that is a natural refuge to allow shepherds to protect themselves from wild animals; it originally housed The Prisoners of Michelangelo (now replaced by copies), statues that were first intended for the tomb of the Pope Julius II. Other rooms in the Grotto containGiambologna's famous Bathing Venus and an 18th-century group of Paris and Helen by Vincenzo de' Rossi. 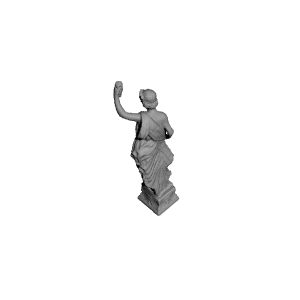 ×
2 collections where you can find Bacchus at The Boboli Gardens, Italy by Scan The World