Bacchus at The Palace of Versailles, France

3D
Scan The World
2,671 views 201 downloads
1 collection
Community Prints Add your picture
Be the first to share a picture of this printed object
0 comments

Bacchus at The Palace of Versailles, France

Duseigneur was born in Paris, studied at the École des Beaux-Arts, and in 1831 achieved renown when he exhibited Roland Furieux, now in Louvre and often regarded as the first romantic sculpture. He turned quickly almost exclusively to the production of religious works, along with medallions and busts of Jacques de Rougé, Marquis du Plessis-Bellière (now in the Palace of Versailles), and poet Gérard de Nerval.

His most famous work is on permanent display at The Louvre, Roland Furieux.

(archival information; accompanied text to sculpture at the gardens of The Palace of Versailles, France)

Print with many supports. Low speed (10-15 mm/s) with PLA for a good cooling. 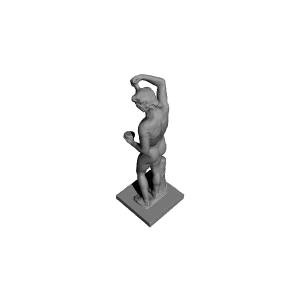 ×
1 collections where you can find Bacchus at The Palace of Versailles, France by Scan The World