3D
360°
Scan The World
1,253 views 62 downloads
Community Prints Add your picture
Be the first to share a picture of this printed object
0 comments

In 1979, the city of Brussels decided to restore the city's system of drinking fountains. Following an example of decorated historical troughs, the city council wanted to restore the old tradition by placing new fountains on the site of the disappeared ones, using scenes and characters from paintings by Pieter Bruegel the Elder. The bronze statues decorating the fountains were mostly made in 1980-84 by Jos De Decker (1912-2000) and Jean Roig (born 1926), and they stand on top of a usually fluted column. They proved popular with thieves and vandals at the time.

This fountain shows the bagpipe player from The Peasant Dance (https://en.wikipedia.org/wiki/The_Peasant_Dance) 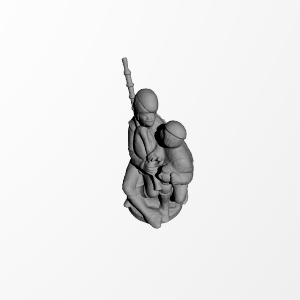