3D
26,826 views 2,380 downloads
32 collections
Community Prints Add your picture
Be the first to share a picture of this printed object
5 comments

This mask is a fine art exercice of mine, freely inspired from the mask worn by Bane in the movie The Dark Knight Rises.

Bane is shown to be a capable close range fighter in the Pit before being trained by the League of Shadows. During his fights with Batman, his abilities honed over the years are shown. He uses his brute strength and ferocity to gain an advantage over his opponents. He can snap necks and crush windpipes with ease. He can think and act quickly in the moment for whatever the situation may require. Bane also has a mask that administers anesthetic gas through tubes into his body which holds the pain from physical injury at bay. However, the mask is also a weakness if it's damaged as the pain is unleashed.

The mask was created on 3D studio max as the body was already created in Zbrush. This helped me as I was able to model the mask on top of the existing model. I created every subtool seperately and modified them to look like the reference materials I took from the film and imported the model as an obj into zbrush, dynameshed the model and then exported as the final .stl. 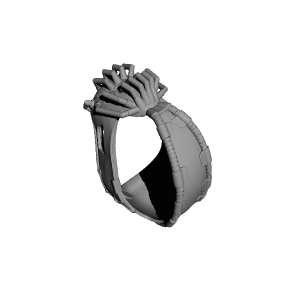