3D
Scan The World
4,552 views 246 downloads
2 collections
Community Prints Add your picture
Be the first to share a picture of this printed object
0 comments

This building gained national attention in December, 2004 when fire swept through the 29th and 30th floors. From Baltimore to Florida to Los Angeles, people wondered how it was possible that a 44-story building could not have a fire suppression system. Locally, it added more fuel to the controversy over Chicago's fire regulations. Though the city considers itself to have the most advanced fire prevention rules in the world, for the second time in two years they were shown to be insufficient. The first incident came in October, 2003 when six people died in a fire at the the Cook County Administration Building. After that blaze, the city council vowed to address gaps in Chicago's fire code. Specifically, the rule which exempts high-rise buildings constructed before 1975 from having fire sprinklers. When the exemption was revealed in the media, there was outrage in the community, and among the family members of those who died.
After a while, things settled down and people started to forget about the deadly fire. Then just 14 months later, this building erupted into flames. A dismayed public once again turned its ire on local politicians who a year earlier had promised to make the city's high-rise buildings safer. 135 South LaSalle was, too, exempt from rules requiring fire sprinklers. However, to the credit of the building owners, it was being retrofitted for sprinklers at the time of the fire.
This time, Mayor Daley and the city council moved forward with a proposal to require sprinklers in office buildings, but not in residential buildings. The mayor claimed that requiring residential buildings to have sprinklers would bankrupt their owners. He further attacked labor unions and the construction industry for backing sprinklers in residential high-rises, saying they were only supporting the idea hoping to line their own pockets through extra work, especially when putting sprinklers in older buildings could expose hidden asbestos. Few people will ever get the chance to fully appreciate 135 South LaSalle. Its beauty and details have fallen victim to the kind of financial success that allowed the building to be built in the first place. It is socked in on all sides by neighboring towers which prevent mere pedestrians from getting a good look at the architecture around them. 135 South LaSalle is clearly influenced by Chiago's 1930's-era height regulations. It presents four broad 22-story shoulders to each of its corners, and in between, an indentation which helps let light in to some of the interior offices, resulting in a footprint resembling a capital H. Follow any of these indentations upward, and you will see the building's tower. Because it is recessed on all sides, it appears to be part of another, more distant, building behind 135 South LaSalle. This creates an illusion that the tower is more distant, and therefore taller, than it really is. Adding to this are vertical elements in the building's main shaft which help safely guide the viewer's eye upward. 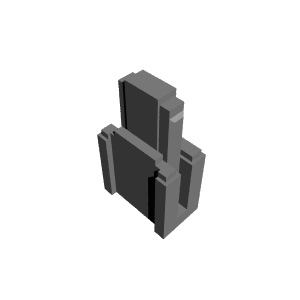 ×
2 collections where you can find Bank of America Building in Chicago, Illinois by jkurstin22