3D
Scan The World
2,625 views 86 downloads
1 collection
Community Prints Add your picture
Be the first to share a picture of this printed object
0 comments

The bas-relief depicts the profile figure with long hair, wearing a diadem decorated with grape leaves and bunches of grapes. The head is leaning on a wicker basket that is partially covered with a goatskin. The work, formerly in the Cesi Collection, later became part of the Ludovisi Collecrion, where in the 17th century account books is listed as a "figure of Bacchus". According to a more likely interpretation, it would represent the face of a maenad or bacchante, a woman dedicated to the cult of the deity Dionysus, as evidenced by numerous Dionysian symbols, namely the goatskin, vine tendrils, basket, and diadem. The choice of red marble and the resemblance of the relief to theatre masks are further allusions to Dionysus, the god of wine and of the theatre. The presence of two holes located in corrispondence of the eye and the mouth, leads us to believe that the slab was used for the passage of water and that it belonged to the decoration of a fountain inside a large bath complex. The stylistic characteristics of the relief and the use of rosso antico marble, coming from Greece, place the work in the Hadrianean period, first half of the 2nd century A.D. 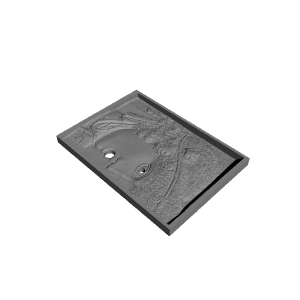