3D
360°
Featured Scan The World
3,719 views 603 downloads
12 collections
Community Prints Add your picture
Be the first to share a picture of this printed object
0 comments

This would have stood at the door of a church so that people could bless or sprinkle themselves with water upon entry. The dolphin was a symbol for Christ. It was believed at the time to be a type of fish, and in Greek the firstl etters of 'Jesus Christ, Son of God, Saviour' form the word for fish (itchtys).

The holy water basin is made of marble which rests on a richly carved stem of Istrian stone. It probably would have originally been placed inside the front door of a Venetian church, as the carving style and the use of Istrian stone is typical of that city. The Latin inscription on the base, AQVA SALVTIS AETERNAE, (Water of Eternal Health) refers to the holy water contained within the basin which was used to bless members of the congregation. 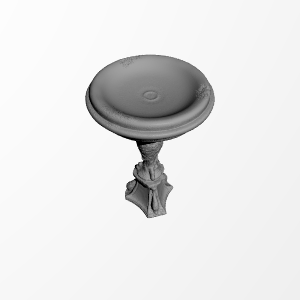