3D
Scan The World
5,816 views 925 downloads
2 collections
Community Prints Add your picture
Be the first to share a picture of this printed object
0 comments

This "beautiful, beautiful, sublime figure" captivated Diderot and his contemporaries. Instead of sculpting the idealized body of a goddess, Allegrain shows a woman in all her mortal realism. The fluidity of the contours, the feeling of fullness, the voluptuousness of her gesture, and the refinement of the hairstyle are eminently sensual.

A "beautiful, beautiful, sublime figure; even the most beautiful, they say, the most beautiful figure of a woman the moderns have created," Diderot enthused at the 1767 Salon. The statue could be seen in the sculptor's studio, where it was admired by one and all. The delicately worked marble imbued the nude with the elasticity and sensuality of real flesh.

The work launched the career of a hitherto unknown artist. Diderot wrote in a letter to his friend the sculptor Étienne-Maurice Falconet, in May 1768, "Well, that Allegrain, whom I'd never heard of, has just done a bathing Venus that has the admiration of even the masters of art." In 1755, before awarding this royal commission to Allegrain, the Marquis of Marigny, Director of the King's Buildings, had sought the advice of Charles-Nicolas Cochin, engraver, keeper of the king's cabinet of drawings, and historiographer of the Académie Royale de Peinture et de Sculpture, who exerted great influence in artistic politics. The latter had to admit that the only known work by the artist was Narcissus, his admission piece for the Académie. Allegrain was nevertheless given the commission, no doubt owing to the influence of his brother-in-law, Jean-Baptiste Pigalle, the most famous sculptor under Louis XV. But he was delivered a faulty block of marble, full of veins and bluish marks. The plaster, shown at the 1757 Salon, aroused little attention, but ten years later the marble created a sensation. Louis XV offered it to his mistress, Madame Du Barry, who placed it in the park of her home, the Château de Louveciennes, and commissioned from the artist a pendant, Diana and Actaeon (Louvre). The two sculptures, seized during the Revolution, entered the Louvre before 1824.

The figure, whose proportions were praised by a critic of the time, exudes simplicity and naturalness, the distinctive qualities of antique statuary. Yet Allegrain's Venus does not explicitly refer to any antique model, although it does have the serpentine fluidity of the works of Giambologna (1529-1608), an Italian sculptor of Flemish origin who had greatly influenced European sculpture. In particular, it has affinities with the "Bather Placing Her Foot on a Perfume Vase," a 17th-century bronze copy of which is in the Musée de la Chartreuse, Douai, notably that figure's sinuous contours, lowered shoulder, small breasts, and very elaborate plaited hairstyle (which Allegrain improves upon). Yet he is not sculpting the firm, idealized body of a goddess but the carnal reality of a woman. She has folds on her stomach, hips, and arms. The pose of the head, facial expression, and the refinement of the hairstyle exude sensual charm. There is a faint smile on her face and a twinkle in the slightly contracted left eye. The forward-leaning head is very daring, considering the fragility of marble. Allegrain created a "bridge" of hair between head and back to support and counterbalance it, and in so doing combines beautiful details and overall clarity. 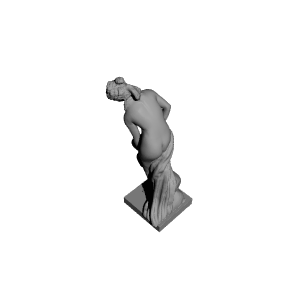 ×
2 collections where you can find Bather, also called Venus at The Louvre, Paris by Scan The World