3D
4,967 views 318 downloads
1 collection
Community Prints Add your picture
Be the first to share a picture of this printed object
0 comments

×
See your Inbox
×
×
Click & Print preview
31 0 Add to Collection
Description
Big White (Baymax), is a health robot in Disney Animation "Super Marines", he is a inflatable robot with fat body, because cute looking and good nature he got everyone's favorite, called "Meng God.
"It is the an inflatable robot, also a medical partner, be able to quickly scan, detect the body's abnormal emotional or injured, and then to treat. He is lovely and cute, is very competent doctors as robots, is also a best friend. his master help him to transform, after a rocket glove, super strength and a series of delicate transformation, big white has become a "super Corps," a member of the general. Together with his master, destroying the forces of evil, revenge for his brother!
White will do anything what the owner let it do, as long as the owner can be happy he will do it, but only one is not in violation of - can not hurt humans. Because very own body fat, but also sudden, a lot of jokes, such as some places must be deflated to get in, and then go after inflated. It is also because sincerely dedicated white character in this Part of the film is also a lot of poke Meng point.
Show more Show less
License
Printing Details 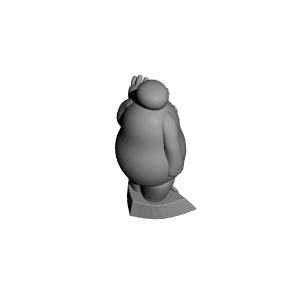 ×
1 collections where you can find Baymax by simonHe15