3D
360°
Featured Scan The World
2,482 views 320 downloads
5 collections
Community Prints Add your picture
Be the first to share a picture of this printed object
0 comments

The almond eyes and refined hair makes this portrait reminiscent of works by Myron (see Discobolus). The fact that the portrait could depict an athlete further adds to this idea, though it is considered (Furtwangler 1893, 52, fig. 46) that the work was created by a follower or student of Myron. Ermitage (1901 nr. 68) suggests the bust portrays Peisistratos, a ruler of ancient Athens who instituted the Panathenaic Games.

The original work is housed in the Hermitage, Russia, and was created around the 5th Century BC. 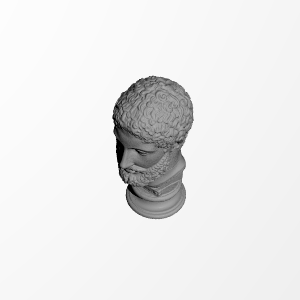