3D
Scan The World
3,768 views 251 downloads
Community Prints Add your picture
Be the first to share a picture of this printed object
0 comments

The origin of Bhairava can be traced to the conversation between Brahma and Vishnu recounted in the Shiv Mahapuran where Vishnu asked Brahma who is the supreme creator of the Universe. Arrogantly, Brahma told Vishnu to worship him, he being the supreme creator. One day Brahma thought, "I have five heads, Shiva also has five heads. I can do everything that Shiva does and therefore I am Shiva" Brahma had become a little egoistic. Not only had he became egoistic, he started to forge the work of Shiva. Brahma started interfering in what Shiva was supposed to do. Then Mahadeva (Shiva) threw a small nail from His finger, which assumed the form of Kala Bhairava, and casually went to cut the head of Brahma. The skull of Brahma is held in the hands of Kala Bhairava; Brahma Kapala in the hands of Kala Bhairava and Brahma’s ego was destroyed and he became enlightened. Then onwards he became useful to himself and to the world and deeply grateful to Shiva. In the form of the Kaala Bhairava, Shiva is said to be guarding each of these Shaktipeeths. Each Shaktipeeth temple is accompanied by a temple dedicated to Bhairava. 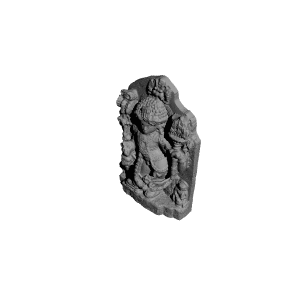 ×
0 collections where you can find Bhairava at The Guimet Museum, Paris, France by Scan The World