3D
Scan The World
4,150 views 222 downloads
Community Prints Add your picture
Be the first to share a picture of this printed object
0 comments

The Bicha of Balazote is an |Iberian sculpture that was found in the borough of Balazotein Albacete province (Castile-La Mancha), Spain.

Bicha is a Spanish word, one meaning of which is a hybrid man/animal. The sculpture has been dated to the 6th century BCE, and has been in the National Archaeological Museum of Spain in Madrid, since 1910.

This sculpture represents an androcephalic bull (a mythical animal with the body of a bull and a human head). The back was plain and abutted to a funerary monumet, where it served an apotropaic purpose as guardian and protector of the tomb.

The head is sculptured from a different block to that used for the body. The mouth is small, the eyes large, there are the remains of horns (which have not been preserved), and below them the ears. The hair is indicated by tufts using a straight incision.

In terms of iconography it is identified with the representation of Achelous, a Greek river god. Combined with its features and general style this means it can be considered a work of Greek influence created on an underlying oriental base. 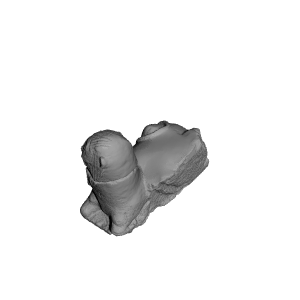