3D
Scan The World
2,705 views 84 downloads
3 collections
Community Prints Add your picture
Be the first to share a picture of this printed object
0 comments

Half way between the Meisian ideals of the past and the skyscrapers of the future, the Boeing Headquarters manages to present a modern face to the world while being covered in a forest of unnecessary spandrels. But the big story here is how the tower was built. It is constructed hovering over very active rail lines running in and out of Amtrak's Union Station. The developers leased so-called "air rights" to create their building. In essence, they are renting the air above the rail lines for $1,300,000 a year for 99 years. To accomplish such a feat, a large portion of the skyscraper is built on a platform that actually hangs in the air, suspended above the tracks in part by a truss visible on the roof. To further complicate matters, when it was constructed the building and the land had different owners. The building owners leased the ground for their 36-story tower from another company for about a hundred years. Remarkably, the building was erected without stopping rail service even though some of the train tracks had to be moved. 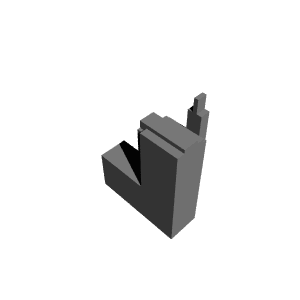 ×
3 collections where you can find Boeing Corporate Headquarters in Chicago, Illinois by jkurstin22