3D
Scan The World
6,057 views 599 downloads
3 collections
Community Prints Add your picture
Be the first to share a picture of this printed object
0 comments

This is one of four groups depicting an abduction, another being Saturn and Cybele (also at The Louvre and on Scan the World, find it here!) by Regnaudin, created as a commission piece for the park of The Palace of Versailles from French painter Charles Le Brun in 1674. The four large group sculptures symbolise the four elements, this one representing air, which were put in place alongside other sculptures of four (The seasons, times of the day, continents, poems, temperances of man). The air is represented by an episode in Ovid's Metamorphosis: The north wind, Boreas, abducts Orithyia, the duaghter of Erechtheus, the king of Athensm to bring into his Kingdom of Thrace. The model was undertaken by Marcy from 1677 to 1679 and was completed by his student Anselme Flamen from 1684 to 1687 and was placed at the Organgerie of Versailles in 1716 and then brought near to the circular pond of the palace gardens. Is is now on permanent display in The Louvre, Paris, after being restored between 2004-2006 by Pari Mutuel Urbain. 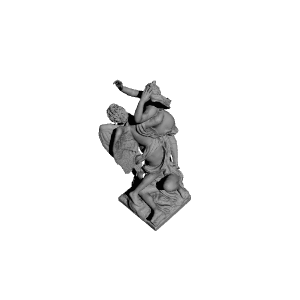 ×
3 collections where you can find Boreas Abducting Oreithyia at The Louvre, Paris by Scan The World