3D
5,862 views 300 downloads
3 collections
Community Prints Add your picture
Be the first to share a picture of this printed object
0 comments

This methylamine barrel is adorned with the face of the lucrative drug manufacturer Heisenberg AKA Walter White as well as the Br-Ba element symbols to represent the name of the show.

Breaking Bad is widely regarded as one of the greatest television series of all time. By the time the series finale aired, the series was among the most-watched cable shows on American television. The show received numerous awards, including sixteen Primetime Emmy Awards, eight Satellite Awards, two Golden Globe Awards, two Peabody Awards and a People's Choice Award. In 2014, Breaking Bad entered the Guinness World Records as the highest rated show of all time. 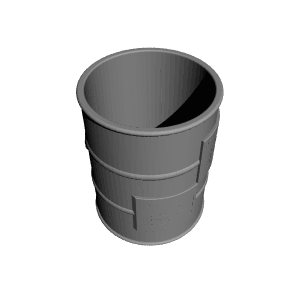