3D
Scan The World
4,277 views 268 downloads
6 collections
Community Prints Add your picture
Be the first to share a picture of this printed object
0 comments

The city-states of Greece were often either united against a common enemy or at war with each other. By the fifth century BC, a key element in warfare were the groups of hoplites, heavily-armed soldiers, whose name derived from the hoplaor round shield. Each city-state was defended by its own citizens, and the hoplites were usually the richer men, as equipment was expensive.

There are regional variations in the style of hoplite armour: this bronze helmet is of the rather elegant shape that is particularly associated with the city of Corinth. It was probably of the type that the Greeks themselves knew as 'Corinthian' (Herodotus IV, 180). Beaten out entirely from one piece of bronze, it required exceptional skill on the part of the bronzeworker.

Needs to print upright, and although the whole helmet does not need internal support, you will need to add a pillar of supports for the very top where it flattens out. Printed here at 10cm high, perfect for teddies. When printed at smaller scale than 100%, a hole appears at the back 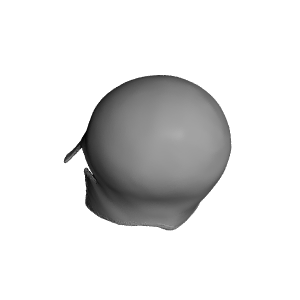 ×
6 collections where you can find Bronze Corinthian Helmet 1 at The British Museum, London by Scan The World