3D
Scan The World
1,794 views 127 downloads
1 collection
Community Prints Add your picture
Be the first to share a picture of this printed object
0 comments

This sculpture is a Khmer chaitya (miniature tower-shrine).

Chaitya hall, chaitya-griha, or caitya refers to a shrine, sanctuary, temple or prayer hall in Indian religions. The term is most common in Buddhism, where it includes a stupa at one end. Strictly, the chaitya is actually the stupa itself, and the Indian buildings are chaitya halls, but this distinction is often not observed. Outside India, the term is used by Buddhists for local styles of small stupa-like monuments in Nepal, Cambodia, Indonesia and elsewhere. In the historical texts of Jainism and Hinduism, including those relating to architecture, chaitya refers to a temple, sanctuary or any sacred monument.

This monolithic chaitya stood in a Buddhist temple complex to mark its boundaries. Its principal deity is the goddess Prajnaparamita (Perfection of Wisdom), who personifies the transcendent knowledge embodied in the famous Sutra text of that name. She holds a rosary and a book in her upper hands. Also depicted are Lokeshvara and two female deities. 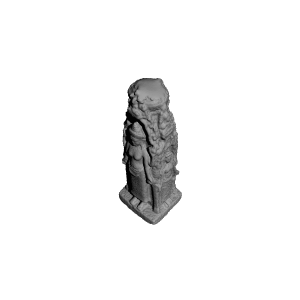