3D
Scan The World
3,000 views 211 downloads
4 collections
Community Prints Add your picture
Be the first to share a picture of this printed object
0 comments

"Vojin Bakić (5 June 1915 in Bjelovar – 18 December 1992) was a prominent Yugoslav sculptor of Serbian descent. Bakić was an important figure, particularly in the 50’s and 60’s Croatian contemporary art scene, and collaborated with the group EXAT-51 and the Nove tendencije (New Tendencies) movement. He executed many public sculptures.

After 1945 he gravitated towards the impressionistic treatment of the surface. This period is primarily marked by his portraits ofIvan Goran Kovačić (1946) and Silvije Strahimir Kranjčević (1948). During the 1950s Bakić reduced the volume of his sculptures by the use of sharp fractures as edges, and later by merging the details of the sculptural mass (Self-portrait, 1952 and sketch for the Marx and Engels Monument, 1950–1953). During that time, he made an entire series of bull sculptures in various dimensions (Bull, 1950, 1956). With the series entitled Nudes, Torsos and Heads he completed his focus on organic, associative shapes, and from 1958 he turned towards the challenge of open forms, inner spaces and light reflections. Further professional development made him the first artist in a local context to follow the principles of geometric abstraction and to start the study of optic effects. By alternating concave and convex surfaces, he made “light shapes” which were close to constructivist poetics. In Elaborated Surfaces (1960–1964) he articulated strict and consistent units made of lined-up elements, whereas in Light-bearing Shapes(1963–1964) he created effective structures by means of modulating identical mirror units, for which he also used new materials, such as stainless steel." 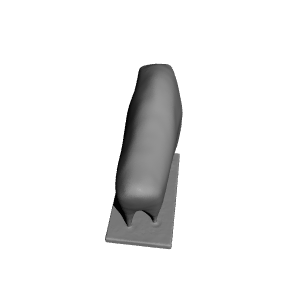 ×
4 collections where you can find Bull at The Middelheim Museum, Antwerp by Scan The World