Bust of a Vestal by Pasquale Romanelli

3D
360°
Scan The World
2,349 views 247 downloads
2 collections
Community Prints Add your picture
Be the first to share a picture of this printed object
0 comments

Bust of a Vestal by Pasquale Romanelli

This is a bust of a vestal by Pasquale Romanelli.

Vestal in the religion of Ancient Rome, was a priestess consecrated to the goddess of the Vesta household. Originally, it is likely that there were two, four in Plutarch's time and later, six. Of their importance, they show that the College of Las Vestales and its welfare were considered fundamental for the continuity and security of Rome. They were public priestesses Vesta publishes populi Romani Quiritium and, as such, they were an exception in the Roman priestly world, which was almost entirely composed of men.

Pasquale Romanelli was a Florentine sculptor who achieved an international reputation for his finely carved mythological and biblical marble figures. He began his training at the Accademia di Belle Arti in Florence with Luigi Pampaloni and then with the foremost Tuscan neoclassical sculptor, Lorenzo Bartolini. Remaining in Bartolini’s favor, the two sculptor's collaborated and, upon the master’s death in 1850, Romanelli became the successor to his studio.Romanelli also executed numerous important commissions for monuments, such as those to Vittorio Fossombroni in Arezzo, Masi in Pavia, and Demidoff in Florence. Romanelli’s final tribute to his master, Bartolini’s tomb monument, is housed in Santa Croce in Florence. After Romanelli’s death in 1887, his son Raffaello and grandson Romano took over his workshop and continued his legacy. 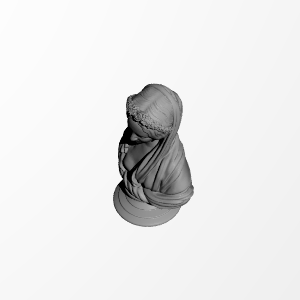