Bust of Alexander the Great at The British Museum, London

Bust of Alexander the Great at The British Museum, London

This head was acquired in Alexandria, the city founded by Alexander in 331 BC, and the location of his tomb. Alexandria was also the capital of the longest surviving Hellenistic dynasty, the Ptolemies. From the time of the reign of Ptolemy I Soter ('Saviour') (305-282 BC), Alexander was worshipped as a god and the forefather of the dynasty. Alexander was always shown clean-shaven, which was an innovation: all previous portraits of Greek statesmen or rulers had beards. This royal fashion lasted for almost five hundred years and almost all of the Hellenistic kings and Roman emperors until Hadrian were portrayed beardless. Alexander was the first king to wear the all-important royal diadem, a band of cloth tied around the hair that was to become the symbol of Hellenistic kingship. made in the Hellenistic Greek period, 2nd -1st Century BC. 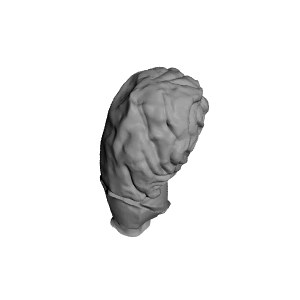 ×
5 collections where you can find Bust of Alexander the Great at The British Museum, London by Scan The World
×
Juergen Weigert
@JuergenWeigert
1
Printed on: STARTT
Material: PLA
Posted at: 28th June 2022

ca 10 hours, for the upper 10cm I cut away the lower part of the bust to save some time.