Bust of Alexandre Brongniart at The Kiev Museum of Western and Oriental Art, Ukraine

3D
Scan The World
6,105 views 404 downloads
Community Prints Add your picture
Be the first to share a picture of this printed object
0 comments

Bust of Alexandre Brongniart at The Kiev Museum of Western and Oriental Art, Ukraine

For the bust of Louise Brongniart, you can find and print from Scan the World here!

Louise and Alexandre were the children of Alexandre Théodore Brongniart, the famous architect of the Bourse (old Stock Exchange) in Paris. These busts demonstrate Houdon's marvelous ability to express the freshness of childhood without sentimentality. Louise still has the slight chubbiness of a young infant. In his rendering of her eyes, Houdon portrays her with the serious expression children sometimes have. Young Alexandre became a mineralogist and director of the Sèvres porcelain manufactory.

Louise and Alexandre were the children of the architect Alexandre Théodore Brongniart (1739-1813), famous for having built the Paris Bourse (old Stock Exchange), the Palais Brongniart. Brongniart was also the designer of the Capuchin monastery in the Rue d'Antin (now the Lycée Condorcet) and a friend of the sculptor Clodion. His son, Alexandre Brongniart, became a distinguished mineralogist and a specialist in firing techniques, directing the Sèvres porcelain manufactory from 1800 to 1847.

Busts of children were very rare in the 17th century and first half of the 18th century, but from 1750-60 onward they became increasingly common. This phenomenon echoed a shift in mentality with regard to childhood, as reflected in the publication of Jean-Jacques Rousseau's Emile in 1762. It was also explained by the sculpted portrait becoming accessible to wider circles of society, and also by the development of "study heads" - usually portraits that were idealized to a greater or lesser degree.
Houdon showed an interest in children's portraits very early on, during his training period in Italy. He sent a child's head sculpted in marble to his first Salon in 1769. At this Salon, Jean-Baptiste II Lemoyne - who, without being Houdon's teacher, nonetheless advised him when he was starting out - presented his Little Girl with a Scarf (Louvre).

The busts of the Brongniart children established the sculptor's marvelous ability to depict the freshness and innocence of childhood without sentimentalism, expressing the personality of his subjects. The two busts were designed to contrast with each other. They turn their heads in opposite directions. Alexandre is dressed; Louise is nude. The liveliness of the boy is reflected in his unkempt hair, open jacket, mischievous look, and in the more vigorous modeling of the face. Louise seems more poised: she still has the round cheeks of a very young child, and her hair is carefully swept up in a bun secured by a band with a bow on the top. The color of the eyes is conveyed by differing treatments: Alexandre's irises, rendered by two concentric rows of radiating incisions, give the impression of light-colored eyes, whereas Louise's irises are deeply hollowed out, the resulting shadow imparting a darker, more serious look. The sculptor has left a small element in relief at the edge of the pupil to catch the light, which heightens the lifelike nature of the gaze. Houdon has not been surpassed - except perhaps by himself - in his portraits of his own children, Sabine (Louvre), Anne-Ange (Louvre), and Claudine (Worcester Art Museum).
These two terra-cotta portraits were presented at the 1777 Salon and became very popular. Many marble and bronze versions of them were made, and they were reproduced in Sèvres biscuit porcelain and in terra-cotta. The busts remained in the Brongniart family until the Louvre purchased them - Louise's portrait in 1898 and Alexandre's in 1900. 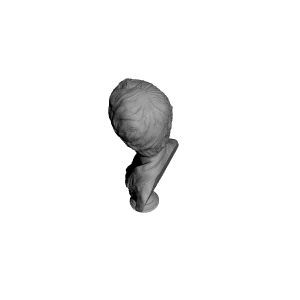 ×
0 collections where you can find Bust of Alexandre Brongniart at The Kiev Museum of Western and Oriental Art, Ukraine by Scan The World