Bust of an Aged Roman at The State Hermitage Museum, St Petersburg

3D
Support Free Scan The World
2,212 views 81 downloads
Community Prints Add your picture
Be the first to share a picture of this printed object
0 comments

Bust of an Aged Roman at The State Hermitage Museum, St Petersburg

This excellent piece dates to the late Republican or early Imperial Roman period (late 1st century BC) and is representative of Verism, the essence of which is the desire to create the maximum portrait likeness, without idealization, at times naturalistically catching unique peculiarities of a particular face. It is the individual features which are of interest to the Roman artist. It was the man who lived for the good of his family and of Rome who would be an example to be emulated by his descendants. Such small busts were usually attached to stone pillars or hermae and placed in tombs. The good state of preservation of this piece allows us to suggest that the portrait of an elderly Roman was intended for his burial vault. The portrait is known as "portrait of an agrarian", since it shows a Roman of the Republican period, a man who lived modestly, took personal charge of his household and knew all the finer details of rural economy. Such a man, sober and thrifty in his everyday life, would be brave in times of danger and merciless towards his country's enemies. These were the citizens who, according to Roman tradition, were the cornerstones of the power and might of the state. 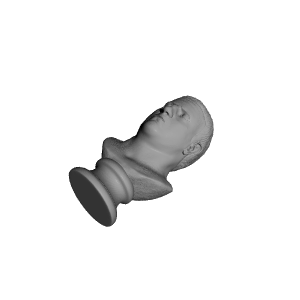 ×
0 collections where you can find Bust of an Aged Roman at The State Hermitage Museum, St Petersburg by Scan The World