In Greek mythology Athena is the goddess of war strategy (amongst many others), her Roman equivalent is Minerva. Many sculptures of Athena exist and are often modeled from the Athena of Velletri (or Velletri Pallas), a lost Greek bronze sculpture by Kresilas c. 430 BC depicted wearing a helmet of high plume. The oval face and the sharpness of the eyebrow ridge, nose and eyes mirror those of the bust of the helmeted Pericles at The British Museum (also on Scan the World) which attributes to Kresilas. The most famous version of the Athena of Velletri is the 10ft high example now on permanent display at The Louvre, Paris, (also on Scan the World) which has traces of red colour in the hair and around the eyes and mouth. This marble sculpture mimicks this type with a considerably taller helmet. 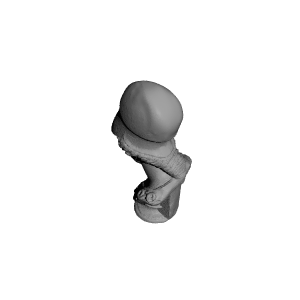 ×
11 collections where you can find Bust of Athena at The Altes Museum, Berlin by Scan The World
×
Creative Journeys
@Creative Journeys
0
Printed on: Tevo Tarantula
Material: PLA
Posted at: 10th March 2021