3D
360°
Featured Scan The World
2,809 views 365 downloads
3 collections
Community Prints Add your picture
Be the first to share a picture of this printed object
0 comments

At only 20 years old, one of the Baroque's greatest sculptors Giovanni Lorenzo Bernini created this portrait bust of the mother of Cardinal Maffeo Barberini (1568-1644), Camilla Barbadori. When the Cardinal was elected pope a few years later and adopted the name Pope Urban 8th, he became Bernini's most important patron.

The bust of Camilla Barbadori (carved 1619), along witha correspondance of the Cardinal's father, Prince Antonio Barberini (1607-1671), stood in niches in the family burial chapel in Sant 'Andrea della Valle in Rome.

A very particular feature of the Baroque style is a play between light and dark. This is seen both in the contrast between Camilla Barbadori's smooth pale face and the deep shade that results from the complete cloak of the neck and the shadows of the eyes, which are seen from a distance full of life, because Bernini had carved very deep furrows around the pupils, thereby the darkness of the shadow gives way to the viewer's own interpretation of what is seen.

It was not only within the portrait bust the young artist gained crucial importance, but also within the fresh sculpture he managed to create the framework for a new style. 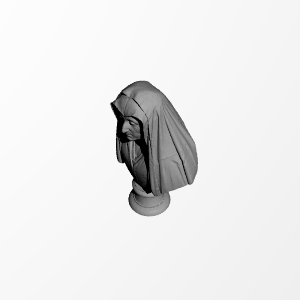