3D
Scan The World
3,115 views 203 downloads
Community Prints Add your picture
Be the first to share a picture of this printed object
1 comments

Fedot Ivanovich Shubin (1740-1805), né Shubnoi, the sculptor of this bust of Catherine the Great, was the son of a fisherman from the White Sea coast, Russia. Having produced carvings in bone and mother-of-pearl as a child, he went to St. Petersburg in 1759 and studied there at the Imperial Academy 1761-67 under Nicholas-François Gillet (1712-91). He then moved to Paris where, thanks to a recommendation from Diderot, a friend of Dmitry Golitsyn, Russian Ambassador, he studied under the famous sculptor Pigalle, 1767-70. He worked in Rome 1770-72, and briefly with Nollekens in London in 1773.

Shubin was the pre-eminent Russian Neoclassical sculptor and this portrait bust is similar in style to Neoclassical portrait busts created elsewhere, and particularly in France. He executed free-standing sculptures, architectural decoration, and most notably portrait busts of Russia's aristocracy including members of the Golitzyn family who are reputed to have owned this bust. Shubin also carved a celebrated full-length marble of Catherine the Legislator, 1789, now in the Russian Museum, St Petersburg.

This highly finished bust, of 1771, with its combination of formality with a lively smile, has been copied in bronze and biscuit porcelain. It remains an iconic image of Catherine the Great, who embraced the style of Neoclassicism in major building projects as well as collecting. 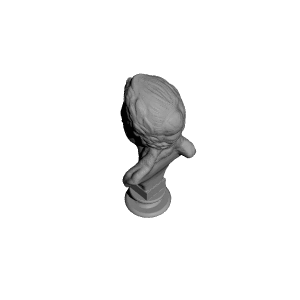 ×
0 collections where you can find Catherine II, Empress of Russia by vam