3D
Scan The World
2,455 views 63 downloads
Community Prints Add your picture
Be the first to share a picture of this printed object
0 comments

This is a bronze bust depicting Dame Louisa Brandreth Aldrich-Blake, (15 August 1865 – 28 December 1925), one of the first British women to enter the world of medicine. Born in Chingford, Essex, the oldest daughter of the curate. Aldrich-Blake was a graduate from Royal Free Hospital in 1893. She obtained her Master of Surgery and was a lead surgeon by 1910. Aldrich-Blake volunteered often during the First World War. She was also one of the first people to perform on rectal and cervical cancers. For all of her commitment during her career, Louisa Aldrich-Blake has a statue of her in Tavistock Square, London close to her alma mater.

This double-sided monument, which sits above a curved seat, features two busts of Dame Aldrich-Blake, both holding a book. On the sides of the monument are the depictions of the Rod of Asclepius – an intertwined staff and serpent long used as a symbol for the medical profession.

The base and seat were designed by Edwin Lutyens – the man behind the Cenotaph – and the identical bronze busts were the work of Arthur George Walker.

The monument was apparently erected in 1926, a year after Dame Aldrich-Blake’s death, in a rather fitting location, Tavistock Square is the location of the headquarters of the British Medical Association in BMA House.

As well as listing her achievements in the world of medicine, the monument bears the rather uplifting inscription: “The path of the just is as the shining light”. 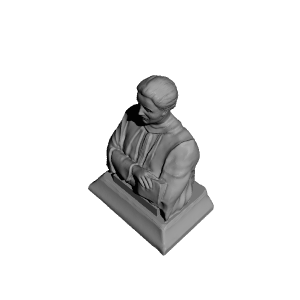