3D
Scan The World
2,122 views 102 downloads
Community Prints Add your picture
Be the first to share a picture of this printed object
0 comments

This rare large-scale faience portrait, one of only a few early examples known, embodies the Count of Aranda’s ambitious drive to develop the arts in his native Spain to a level that rivalled that of France and Germany.

Don Pedro Pablo Abarca de Bolea, 10th Count of Aranda (1718-1799), was a well-travelled man of the Enlightenment and a man ahead of his time. He inherited the prosperous Spanish ceramics factory at Alcora on his father’s death in 1742, and his progressive tastes were hugely influential on the factory’s practices and output. Aranda’s very varied career began with military success, and later he spent large periods of time travelling or in diplomatic service as Spanish Ambassador to Portugal, Poland and France, where he spent over a decade at the courts of Louis XV and Louis XVI.

Between about 1750 and 1754, Aranda lived abroad, studying military tactics. He spent the majority of this time in Prussia, but he also visited Dresden, Paris and Vienna. While he was in Dresden it seems highly likely that he would have been inspired by the fine porcelain produced by Augustus III’s factory at nearby Meissen. At that time the chief modeller there, J.J. Kändler, was working on a monumental porcelain equestrian statue of Augustus, and it is tempting to speculate whether the count was aware of this project and whether this had any influence on the Alcora factory’s ceramic portraiture (although Kändler never completed this project, he did produce a monumental head of the King).

Aranda was briefly Spanish Ambassador to Portugal in 1755, but even though he was recalled due to disagreements with the Portuguese statesman, Pombal, King Ferdinand VI still awarded Aranda the Order of the Golden Fleece. After King Ferdinand’s death, Aranda was staying in Zaragoza where the new King of Spain, Charles III, was delayed (due to the Queen’s ill health). This gave him the opportunity to ingratiate himself with Charles and having gained his favour Aranda’s political standing increased during the 1760s. He was appointed Ambassador to Poland, where he arrived in September 1760. Throughout his travels, the count was fascinated by other ceramic factories and their ability to produce porcelain. In 1764, he recruited Johann Christian Knipffer to introduce his porcelain-making expertise at Alcora (although ‘true’ hard-paste porcelain was never achieved at Alcora). Numerous appointments of skilled porcelain workers to Alcora would follow over time.

From 1773 Aranda was Ambassador to the Court of Louis XV in France, where he remained until 1787. This may have been the most formative experience of his career. During this time he met Benjamin Franklin and he pressed the Spanish government to support the American revolution and adapt its approach to American-Spanish colonies. Also during this period of time, Aranda tried to glean as much as possible about porcelain production from Parisian factories, and in 1774 he recruited Francois Martin (possibly from Limoges) to work at Alcora. Although Aranda was absent from his factory during these years, he remained actively engaged with it and he often had experimental samples sent to him in Paris for inspection. His first wife, Antonia María de Portocarrero, was left to oversee the running of the factory, with instructions from her husband. In 1786 Aranda arranged for two of his workers from Alcora, Vicente Alvaro and Cristóbal Pastor, to come to Paris and work at the Queen’s factory in the Rue Thiroux for a year and a half to increase their expertise.

Aranda would have become very familiar with contemporary French portraiture while he was Ambassador in Paris. In the 1770s several portraits of his great friend Voltaire were produced by five different porcelain factories (Sèvres, Lunéville, Berlin, Wedgwood and Derby), and he would presumably have been aware of some of these. The present monumental portrait bust of Aranda is very much in the 18th-century French style, at a time when rococo was receding in popularity and being replaced by the neoclassical style. As Alice Wilson Frothingham suggest, the fine quality of the Alcora portrait and its very French feel suggests that it was based upon a French original, presumably produced from life in France (the present whereabouts of an original bust is not known). If this is the case, it would be reasonable to assume that the original was sculpted in Paris during the count’s time as Ambassador there. Aranda began his time in Paris as Ambassador in 1773, and in 1777 he was presented with the Order of the Holy Spirit by Louis XVI, which is not present on the Alcora bust, suggesting a terminus ante quem of 1777.

There does not appear to be any documentary evidence recording the author of the present model, or the date it was produced. Wilson Frothingham attributed the model to Julián López, which is highly likely as he was the master of sculptural work at Alcora. Records describe him as ‘maestro principal d’buxante, tallista y modelista’. The present bust is of an unusually impressive size and it would certainly have taken considerable skill to model and fire.

In the final third of the eighteenth century, Alcora concentrated on the production of three different types of the ceramic body; a refined faience, a Tierra de pipa to emulate fashionable English creamware and a soft-paste porcelain. The earliest example of the Count of Aranda bust seems to be modelled in an unusual clay body, termed Loza Blanca in Spanish, decorated with a white opaque glaze and coloured enamels (held by the Hispanic Society of America). The Hispanic Society example has an earlier experimental glaze and it is thought to date to around 1775 when François Martin was first experimenting with pipe-clay. Another undecorated example executed in a similar Loza Blanca to the Hispanic Society’s example is noted to have been held at the factory for years, ‘but if it survives, its location is unknown’.

It is possible that the present bust could perhaps be the missing example which was once held at Alcora. The body of the present bust is of faience type, suggesting that it could date to a period closely following the Hispanic Society example. A probable date for the present bust would be between about 1775 and 1777 – if it had been modelled after this date presumably it would have incorporated the Order of the Holy Spirit, awarded to Aranda in 1777. If López was the modeller, by the latter part of the 1780s he was recorded by the factory director as being ‘subject to fits, very old, and his head none to steady’, making it unlikely to have been produced at this time.

Two more models of this size are known, but these are thought to be later as they have Tierra de pipa or creamware bodies and transparent glaze. Wilson Frothingham notes that both are left in the white and closer to the creamware perfected towards the end of the century, and she dates them to circa 1789-99, although if this is the case, it seems odd that these models would not have been adopted by a repairer at Alcora to include the Order of the Holy Spirit, which Aranda had been given in 1777. A biscuit version of the bust, coloured black, is illustrated by Wilson Frothingham, ibid., 1960, p. 44 (where it is listed as being in the collection of the Duke and Duchess of Alba).

Later versions of the bust have survived, although these examples have been adapted to incorporate the addition of the Order of the Holy Spirit, given to Aranda in 1777. 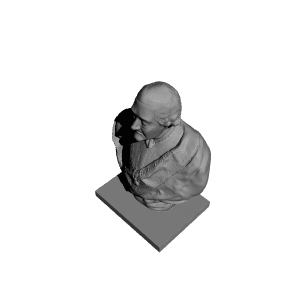