Bust of a Female Slave at The Ny Carlsberg Glyptotek, Copenhagen

3D
Scan The World
4,447 views 456 downloads
3 collections
Community Prints Add your picture
Be the first to share a picture of this printed object
0 comments

Bust of a Female Slave at The Ny Carlsberg Glyptotek, Copenhagen

Carpeaux and his atelier worked up a successful commercial edition of terracotta busts based on the bronze figures constituting his Four Parts of the World Sustaining the Globe, which is the central element of the fountain of the Observatory in the Luxembourg Gardens, Paris. The date of 1872 on this sensitively detailed example corresponds to that of the plaster model of the group shown in that year's Salon; the fountain itself was inaugurated in 1874. He added a Michelangelesque sideward turn, ropes across the chest that seem barely able to contain the young woman's energy, and the poignant inscription on the base: Pourquoi! Naître esclave! (Why born a slave?).

Made with Memento Beta.

nb: the real name of the sculpture is “Negress”. A testimony of a old time. 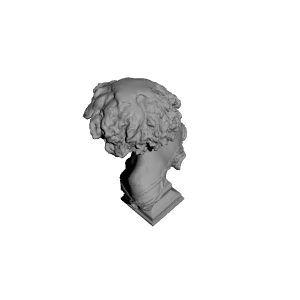 ×
3 collections where you can find Bust of a Female Slave at The Ny Carlsberg Glyptotek, Copenhagen by geoffrey.marchal