3D
Scan The World
2,819 views 142 downloads
Community Prints Add your picture
Be the first to share a picture of this printed object
0 comments

Gerardus Mercator was born 5 March 1512 in Rupelmonde, County of Flanders (in modern-day Belgium). He died 2 December 1594 in Duisburg, Duchy of Cleves (in modern-day Germany). He is renowned as the cartographer who created a world mapbased on a new projection which represented sailing courses of constant bearing as straight lines—an innovation which to this day enhances the simplicity and safety of navigation. In his own day he was the world's most famous geographer but in addition he had interests in theology, philosophy, history, mathematics and magnetism as well as being an accomplished engraver, calligrapher and maker of globes and scientific instruments.

Unlike other great scholars of the age he travelled little and his knowledge of geography came from his library of over one thousand books and maps, from his visitors and from his vast correspondence (in six languages) with other scholars, statesmen, travellers, merchants and seamen. Mercator's early maps were in large formats suitable for wall mounting but in the second half of his life he produced over 100 new regional maps in a smaller format suitable for binding into his Atlas of 1595. This was the first appearance of the word Atlas in a geographical context but Mercator used it as a neologism for a treatise (Cosmologia) on the creation, history and description of the universe, not simply a collection of maps. He chose the word as a commemoration of a King Atlas of Mauretania whom he considered to be the first great geographer. This King Atlas was a son of the Titan Atlas but the two myths very quickly coalesced.

A large part of Mercator's income came from the sales of his terrestrial and celestial globes. For sixty years they were considered to be the finest in the world and they were sold in such great numbers that there are many surviving examples. This was a substantial enterprise involving making the spheres, printing the gores, building substantial stands, packing and distributing all over Europe. He was also renowned for his scientific instruments, particularly his astrolabes and the sets of "rings" used to study the geometry of astronomy and astrology.

Mercator wrote on geography, philosophy, chronology and theology. All of the wall maps were engraved with copious text on the region concerned. As an example the famous world map of 1569 is inscribed with over 5000 words in fifteen legends. The 1595 Atlas has about 120 pages of maps and illustrated title pages but a greater number of pages are devoted to his account of the creation of the universe and descriptions of all the countries portrayed. His table of chronology ran to some 400 pages fixing the dates (from the time of creation) of earthly dynasties, major political and military events, volcanic eruptions and earthquakes, and eclipses. He also wrote on the gospels and the old testament.

Mercator was a very devout Christian born into a Catholic family at a time when Luther's Protestantism was gaining ground. He never declared himself as a Lutheran but he was clearly sympathetic and he was accused of heresy (Lutheranye). He spent six months in prison but he emerged unscathed. This period of persecution is probably the major factor in his move from catholic Louvain to a more tolerant Duisburg where he lived for the last thirty years of his life. Walter Ghim, Mercator's friend and first biographer, describes him as sober in his behaviour, yet cheerful and witty in company, and never more happy than in debate with other scholars, but above all he was pious and studious until his dying days. 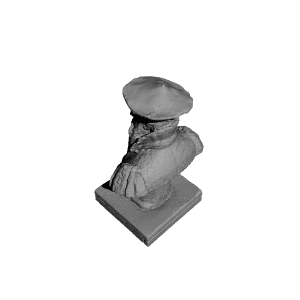 ×
0 collections where you can find Bust of Gerardus Mercator in Sint-Niklaas, Belgium by Scan The World