3D
360°
Scan The World
2,748 views 143 downloads
1 collection
Community Prints Add your picture
Be the first to share a picture of this printed object
0 comments

This a bust of a woman emerging from three-leaf calyx set on a globe; Hellinic facial features; she is wearing an ancient Egyptian headdress consisting of serpent with globe flanked by two ears of corn; she is wearing a fringed shawl tied in a knot at her front; sausage-curl hairstyle; hollow pupils that might have been inlaid with dark stone or glass.

The text on the label of the bust says: The cult of Isis spread rapidly throughout the Mediterranean basin during the Roman period initially among non-Romans, slaves, and women—those on the margins of society—as an alternative to the more staid Roman state religion, from which these groups were largely excluded. The appeal of the cult of Isis, as well as other such mystery religions, was direct communion with the deity, colorful and lively rituals, the possibility of redemption, and the promise of personal immortality. This bronze bust of the Egyptian goddess Isis dates to the high Roman empire (ca. second century CE) when the popularity of her cult was at its zenith. Here she wears a headdress featuring a serpent (uraeus), a traditional symbol of Egyptian royal power, and grain, a symbol of fertility and abundance.

An important cult ritual in the Roman period involved the launching of a ship bearing her image in early spring in order to ensure a safe and prosperous navigation season. Initially outlawed in the early empire, the worship of Isis eventually became more accepted—there was a temple of Isis in Rome itself—partly because it included prayers for the well being of the emperor and the senate and therefore (unlike Christianity) was not a threat to the political power structure of Rome. 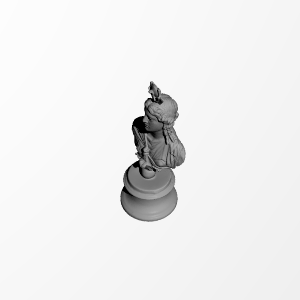 ×
1 collections where you can find Bust of Isis by mhcartmuseum