Bust of Napoleon I

3D
Scan The World
4,526 views 448 downloads
1 collection
Community Prints Add your picture
Be the first to share a picture of this printed object
0 comments

Bust of Napoleon I

This bust of Napoleon I (1769-1821) is from a model by the French sculptor Antoine-Denis Chaudet (1763-1810). Chaudet worked in a Neoclassical style and the 'herm' form of this bust, with the shoulders cut off and straight sides, imitates that of Roman imperial portraits.

Chaudet made the original plaster model for the portrait in 1799. The final marble version of 1804 was the preferred image of Napoleon himself, who had recently been created Emperor of the French, and it became the official portrait, widely-reproduced. In fact biscuit (hard) porcelain versions of this bust in three sizes were made from 1805 at the Sèvres porcelain factory. Italy was under Napoleonic rule at this time and Napoleon had presented his sister, Elisa Baciocchi, with the principality of Lucca and Massa-Carrara, an area which included the Apuan Alps from which Carrara marble was extracted. She ordered the Carrara workshops to carve multiple copies of Chaudet's bust and no less than 1,200 marble versions of this portrait were carved by the workshops between 1807 and 1809. This example is probably one of these official portraits, originally made for public buildings in France. The majority were destroyed when the Bourbon monarchy was restored in 1814.

Napoleon created a link between contemporary France and the great civilisations of the past. His military conquests brought important works of art into French collections, emphasising his position as inheritor of European tradition. The Empire style he promoted adapted the symbols and ornament of Imperial Rome. This portrait, one of a thousand versions, imitates that of a Roman emperor. The image of the new emperor was at the heart of Napoleonic Europe.

"What is a Throne, a bit of gilded wood covered in velvet. No, a throne is a man and I am that man". 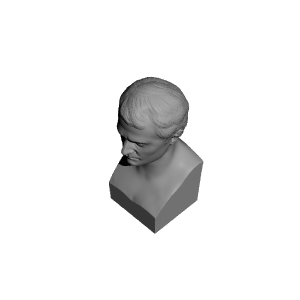