3D
Scan The World
5,300 views 208 downloads
Community Prints Add your picture
Be the first to share a picture of this printed object
0 comments

The classical format of the portrait, showing the sitter without a wig, and with undraped shoulders, as well as eyes deeply incised, may have been suggested by Lord Chesterfield himself, who in his famous letters to his son gave constant advice about education and manners, frequently citing the importance of Roman Antiquity as a guide. In the letter to his son of 17 May 1745 he speaks with admiration of a bust of Cicero he has just added to his library.

The sculptor Louis François Roubiliac (1705-1762) was one of the leading sculptors of his generation, and his busts and monuments are among the most important produced in Britain in the first half of the 18th century. He was born in Lyons, and probably trained in Dresden. He was later in Paris, but from 1730 he was based in London, apart from a brief visit to Rome in 1752. 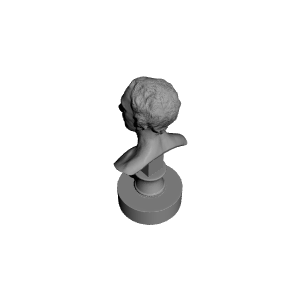