3D
Scan The World
2,222 views 222 downloads
Community Prints Add your picture
Be the first to share a picture of this printed object
0 comments

Martin Desjardins's sculpted portrait of the painter Pierre Mignard is a striking testimony to the friendship between sculptor and model. This bust is one of impressive presence and authority, in which the model's haughty character is expressed by the thin face turned to the left, the jutting chin and proud expression, the determined eyebrows, strong nose, and disdainful pout.  The long hair and open shirt are characteristic of the disheveled look associated with artistic creativity.

Pierre Mignard was a major figure in French 17th-century painting. He was head of the Academy of Saint Luke, in opposition to his rival Charles Lebrun, director of the Royal Academy of Painting and Sculpture (to whom Mignard succeeded in 1690).

The sculptor mingled psychological observation with a certain idealization, erasing any imperfection or particularity of feature, but this is a dashing portrait which represents the painter with the disheveled appearance characteristic of an artist: open shirt accentuated by finely worked lace, and long wavy hair. This bust, animated by a play of light and shade, is a precious testimony to the friendship between sculptor and model. 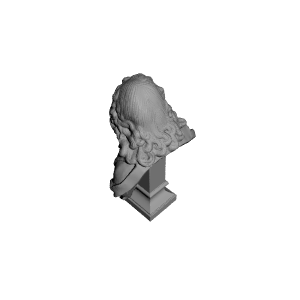