3D
Scan The World
6,062 views 318 downloads
Community Prints Add your picture
Be the first to share a picture of this printed object
2 comments

Marble bust of Pope Clement XIV wearing a skull-cap and a cape tied in front with a knotted cord, is shown looking slightly to his right.

This bust was commissioned in Rome by the British collector Thomas Mansel Talbot (1747-1813) for £140. At the same time he commissioned a bust of himself. Pope Clement XIV (Lorenzo Ganganelli; 1705-1774) had a particularly friendly relationship with the British in Rome. 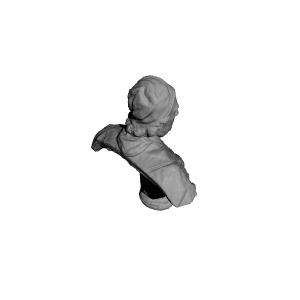