3D
Scan The World
4,172 views 172 downloads
Community Prints Add your picture
Be the first to share a picture of this printed object
0 comments

Buffon, botanist and man of the Enlightenment, was in his time as famous as Voltaire. Houdon portrays him in the antique style, with a rounded truncation of the naked torso, a type he had inaugurated with his bust of Diderot. He imbues his portrait with a vivacity that emphasizes the 74-year-old man's intellectual and physical vigor.

The naturalist Georges Louis Leclerc, Count de Buffon (he received the title from Louis XV in 1771), was appointed Keeper of the Jardin du Roi, the king's botanical garden (which later became the Museum of Natural History), in 1739. From 1744 to 1788, he wrote his monumental Histoire naturelle, genérale et particulière, which covered the whole of the mineral world and the animal kingdom. A man of the Enlightenment, he believed scientific knowledge should be based on experimentation. The publication of his Epoques de la nature in 1779, written in a clear, noble style, won him the admiration of educated circles all over Europe, including several kings. Empress Catherine II of Russia considered Buffon the equal of Newton, and she commissioned Houdon to sculpt a marble bust of the naturalist. The German writer Melchior Grimm, a friend of Diderot who kept European courts informed of intellectual developments in Paris, acted as her intermediary. In 1782 the portrait was sent to Saint Petersburg and installed in the Hermitage Museum. Buffon, too old to make the journey, delegated his son to take it there for him. A marble copy, probably the Louvre sculpture in veined marble, was presented at the 1783 Salon.

The great portraitists of the time had already portrayed the scientist: the painter François-Hubert Drouais in 1761, the sculptor Jean-Baptiste Defernex in 1772, and above all Augustin Pajou, First Sculptor to the King, in 1776. The latter received a commission from the Directorate of the King's Buildings for a monumental full-length statue. He depicted Buffon in the antique style, as a draped nude looking down over the animal kingdom. He made three busts from it, in various costumes, including one in the "French style," i.e., in contemporary costume (Louvre).

Houdon also portrayed Buffon in the antique style, with a naked torso whose rounded truncation cuts off the shoulders. He had already used this habitual way of portraying philosophers for his busts of Voltaire and Diderot (Louvre). But whereas Pajou sought to convey Buffon's genius, Houdon shows the man. Although he has not idealized the 74-year-old scientist, his powerful face and neck give him a vigorous air. He is not wearing a wig, and his natural hair is curled at the temples and tied in a bow. The complete absence of accessories allows one to concentrate on the face. The scientist's authority and superior intellect are conveyed by the almost haughty way he holds his head, his noble, prominent forehead and his keen eye. The bust is animated: the head is pivoting to the left (accentuating the neck tendon) and the lips are half open, as if he were about to speak.

The work met with such success that Houdon reproduced it in different materials, including one in the "French style," with his shirt open at the neck. 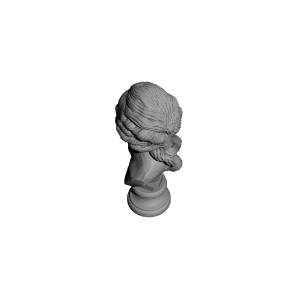 ×
0 collections where you can find Bust of the Count of Buffon at The State Hermitage Museum, St Petersburg by Scan The World