3D
360°
Featured Scan The World
5,149 views 179 downloads
3 collections
Community Prints Add your picture
Be the first to share a picture of this printed object
0 comments

Vitellius was Roman Emperor for eight months, from 16 April to 22 December 69 AD. Vitellius was proclaimed emperor following the quick succession of the previous emperors Galba and Otho, in a year of civil war known as the Year of the Four Emperors. Like his direct predecessor, Otho, Vitellius attempted to rally public support to his cause by honoring and imitating Nero who remained widely popular in the empire.

His claim to the throne was soon challenged by legions stationed in the eastern provinces, who proclaimed their commander Vespasian emperor instead. War ensued, leading to a crushing defeat for Vitellius at the Second Battle of Bedriacum in northern Italy. Once he realised his support was wavering, Vitellius prepared to abdicate in favor of Vespasian. He was not allowed to do so by his supporters, resulting in a brutal battle for Rome between Vitellius' forces and the armies of Vespasian. He was eventually executed in Rome by Vespasian's soldiers on 22 December 69.

Typically, Vitellius is presented as overweight, with a thick neck and chin, however here he is presented with more flattering features. He wears scaled armour, with a mask perhaps representing a lion adorning the chestplate. The original bust is made of spectacularly coloured marbles, giving a rare depth and character to this bust.

This unusual and sophisticated bust of Vitellius is attributed by Annamaria Giusti to Francis Harwood. The bust is an exact replica of a known model, formerly in the Medici collections, exhibited in the Tribuna degli Uffizi for many years. The faithful copying of the model and the use of specialised coloured marbles points towards a skilled sculptor, who was experienced in copying antique models, and had a flair for using different types and coloured marbles. Due to the use of distinctly Tuscan marbles Florence is certainly the most likely origin for its creation. Assuming the present bust to have been made on commission, it is distinctly plausible that the patron would have turned to the pre-eminent sculptor of antique models most experienced with coloured marbles, which at this time was Francis Harwood.

This object was scanned at Sotheby's, during a display of Old Master Sculpture and Works of Art before an auction. Reconstructed with around 200 36mp images using RealityCapture. Cleaned and reconstructed using ZBrush. 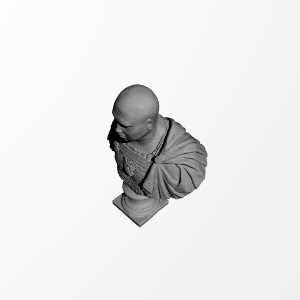 ×
3 collections where you can find Bust of Vitellius by lcvfx