3D
360°
Featured Scan The World
2,681 views 446 downloads
Community Prints Add your picture
Be the first to share a picture of this printed object
1 comments

Carl Christian Hillman Jacobsen (2 March 1842 – 11 January 1914) was a Danish brewer, art collector and philanthropist. Though often preoccupied with his cultural interests, Jacobsen was a shrewd and visionary businessman and initiated the transition of the brewery Carlsberg from a local Copenhagen brewery to the multinational conglomerate that it is today.

Carl Jacobsen did not share his father's political commitment, though like him he was an eager cultural enthusiast known for his interest in Greek and classical art and his engagement led to the founding of the Ny Carlsberg Glyptotek in 1897, an art museum mainly based upon his Antique collections still regarded as one of the most important Danish art museums.

This bust is presumed to have been made by Ludvig Brandstrup, but it has not been confirmed. 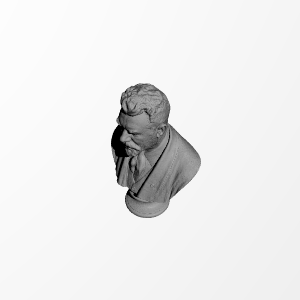