3D
360°
Scan The World
1,434 views 90 downloads
1 collection
Community Prints Add your picture
Be the first to share a picture of this printed object
0 comments

The excavators of Carchemish found numerous bases for statues, altars and basins decorated with bulls or lions. This basalt lion's head was one of a pair of lions that originally formed part of an elaborate statue base. The statue, perhaps of a deity, once stood beside the 'Lion's Gate' of Carchemish. The lions were held by a griffin demon whose hand can be seen on the left of this head. 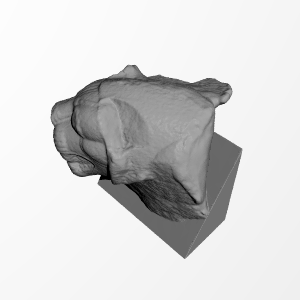