3D
360°
Scan The World
2,771 views 339 downloads
5 collections
Community Prints Add your picture
Be the first to share a picture of this printed object
0 comments

This tiny casket opens a window onto the past, taking us into the domestic world of 16th-century Italy and offering a glimpse into the private lives of Renaissance women. It was once the cherished possession of a woman who used it to hold trinkets and treasures such as cosmetics, perfumes, and jewelry. It illustrates scenes found in Ovid’s Metamorphoses, amorous but moralizing tales that relate to different aspects of love. Stories like the Judgment of Paris (depicted on the front of the casket), and Orpheus’s loss of his wife Eurydice (on the right side) promoted the virtues of devotion, sacrifice, loyalty, and honor while condemning the vices of unbridled passion, vanity, and faithlessness.

Purchase with funds from Gaetano and Susan Vicinelli (Class of 1964) and the Art Acquisition Fund
Digitised by Laura Weston, 2019 - lmweston@mtholyoke.edu 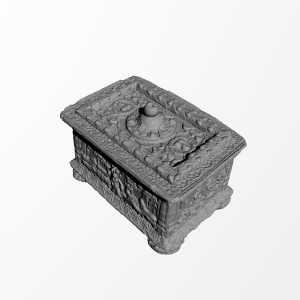