3D
360°
Featured Scan The World
1,997 views 178 downloads
2 collections
Community Prints Add your picture
Be the first to share a picture of this printed object
0 comments

This fragmentary sculpture is a reduced copy of an original work found on the western pediment of the Pathenon in the Acropolis, Greece. The work is thought to depict Cecrops and his daughter Pandrosos, or Hercules and Hebe.

The work is also a copy of the same sculpture, reduced to one third of the original, from Temple F at Eleusis, built possibly in honour of Sabina, the wife of the Emperor Hadrian. The original version of the Parthenon is also housed by The SMK (KAS586).

The overall subject of the west pediment was the struggle between Athena and Poseidon for patronage over the region of Attica. The pediment is in a poor statue of survival, but drawings made by Jacques Carrey in 1674 show many of the figures now lost, including Athena nd Poseidon who dominated the centre.

The original work from where this copy was made is housed at The National Archaeological Museum in Greece, Eleusis (ORIG1312). 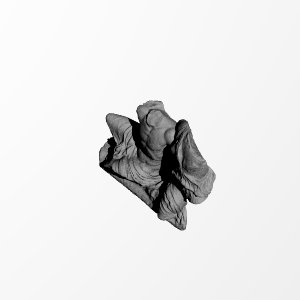