3D
Scan The World
3,044 views 128 downloads
1 collection
Community Prints Add your picture
Be the first to share a picture of this printed object
0 comments

The Temple of Bel stands out from the religious buildings of Palmyra for its size and location; its main altar or adyton (space reserved to the god) was consecrated in 32 AD, but the complex was completed in the early IInd century; it was built on a tell (a low hill) where a previous temple has been identified by archaeologists; the area inside the temenos (outer wall) is an almost exact square with sides of more than 600 ft.

The complex was located at the eastern end of the monumental colonnaded street which crossed Palmyra. Size and location of the temple are an evident sign of the prominence of Bel/Baal over the other deities worshipped at Palmyra.

The decoration of this ceiling was purely ornamental; in 1753 its design became known in Europe through engravings based on drawings by Giovanni Battista Borra; it influenced the decoration of many English mansions (see introductory page) which in turn influenced those of less known buildings. 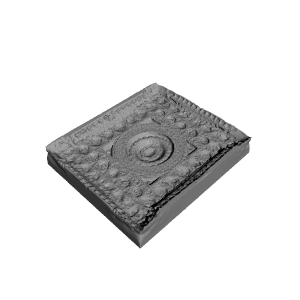